This blog was originally published on Mountainwatch.com and is used with permission.

Following the success of our recent article on the biggest snowfalls Australia’s ever seen – Skiers it would seem, are a pretty nostalgic bunch – we thought we’d follow it up with a look at the 5 best Australian snow years on record, as per snow depth measured at Spencers Creek.

Before diving in I’d be remiss for not mentioning the fact the Australian snow depth, following ‘Stormin Norman’, was the deepest it’d been up at Spencer’s for that time of year in 18 years… And whilst it’s been largely bluebird since that event (making for some amazing riding) another 5-10cm as predicted by the Grasshopper this Saturday could continue what we hope to be a new ‘norm’ (pun intended) when it comes to early season skiing and boarding.

Let’s not forget that on June 29 of last year, a pitiful 4cm was on the ground at Spencers… Only time will tell whether 2018 will continue it’s meteoric rise in snow depth and one day join the highly esteemed years below.

Chalk and Cheese. Whether 2018 continues its trajectory remains to be seen… cross those ski poles! Image:: Snowy Hydro

“We need that [snow depth information] to understand what sort of inflows we are going to receive into our dams, so that we can do some forecasts on our energy production over the next year,” – Said James Pirozzi, the Snowy Hydro’s manager of weather and water (Speaking to the ABC.)

For those that don’t know, the Snowy Hydro site at Spencers Creek sits between Charlotte Pass and Perisher Valley, some 1829m above sea level. It’s been the gold standard for Australian snow depths since the Snowy Hydro began taking measurements way back in 1954. It’s especially unique in that the Snowy Hydro doesn’t record the data with the purpose of getting skiers on hills. Instead, they take the measurements for the purpose of knowing how much water there is in the snow pack – meaning they have to be spot on and can’t afford to exaggerate. 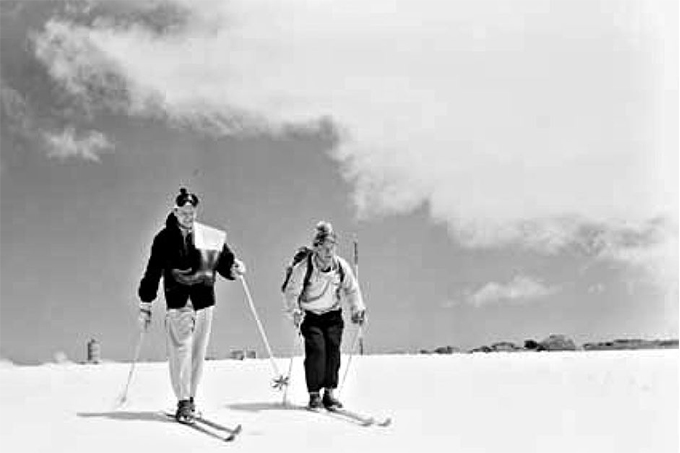 However, as was the case last time when it came to snowfall, there’s no definitive rule as to what makes a ‘great snow season’. Obviously, snow is a critical ingredient and depth is a good way to assess this, but we’ll also be giving a mind to the snowpack’s overall duration. The longer you can ski the better right?

Without further ado, let’s count them down; bearing in mind the average peak snow depth at Spencers is 195cm. 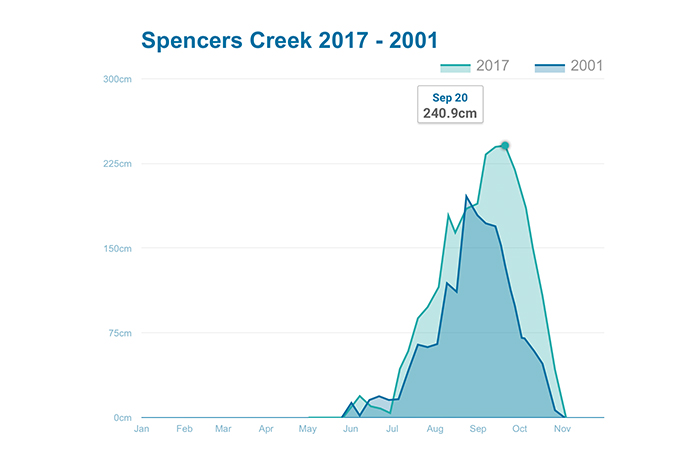 For context here’s what 2017 (a good season) looks compared to 2001 – what might be considered an average season in the scheme of things. Image:: Snowy Hydro

1968 doesn’t register in the minds of many skiers these days being some 50 years ago. But that doesn’t mean it doesn’t belong on this list.

You can see from the graph below, the year completely outperforms 2017; not only in peak snow depth (307cm) but also in how consistently deep the snowpack was throughout the season.

You’ll notice too that snow was already being recorded during May. In fact, by the time opening weekend swung around, 146.3cm was recorded at Spencers Creek. 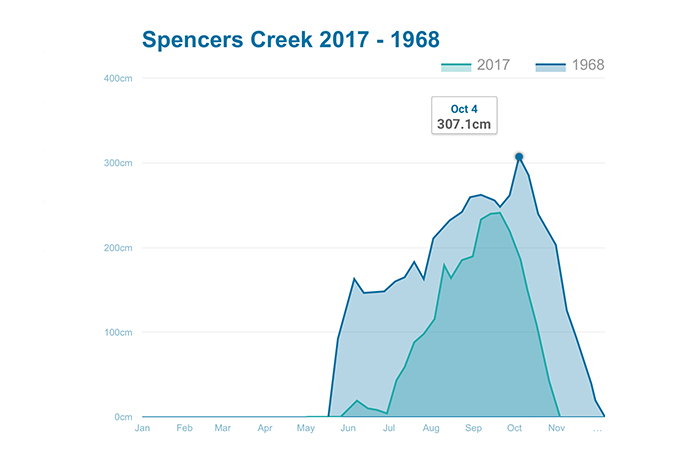 Furthermore, 1968 recorded a staggering 22 weeks wherein the snowpack up at Spencers was over 100cm deep. Unsurprisingly, this made it one of the longest snow seasons on record (together with 1960 and 1964), with skiable snow lasting more than 6 months. 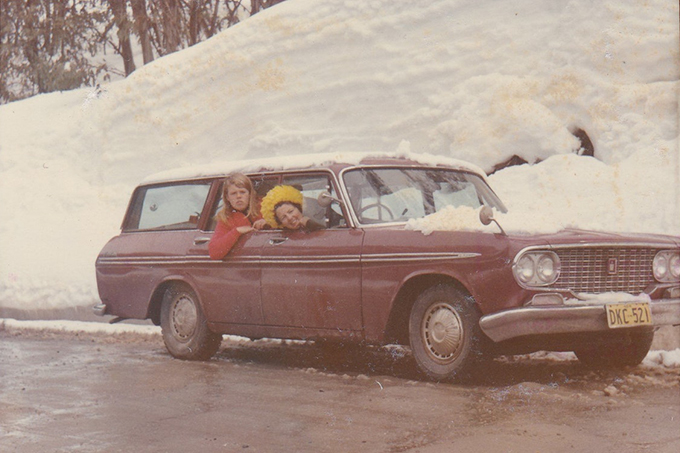 Bring back 1968… hairstyles and all. Image:: Marg – Old Diana Lodge/Ski.com.au

Although the below video doesn’t paint the best picture of the abundance of snow in 1968 – quite like the above image does – it’s an excellent insight into what skiing was like back then (hard). Considering it was supposedly ‘late season skiing’ it could well have been shot in November.

Hereafter known as the ‘last of the three metre seasons,’ 1992, bears a striking resemblance to 2017, just with the addition of an extra 75cm to it’s maximum depth. 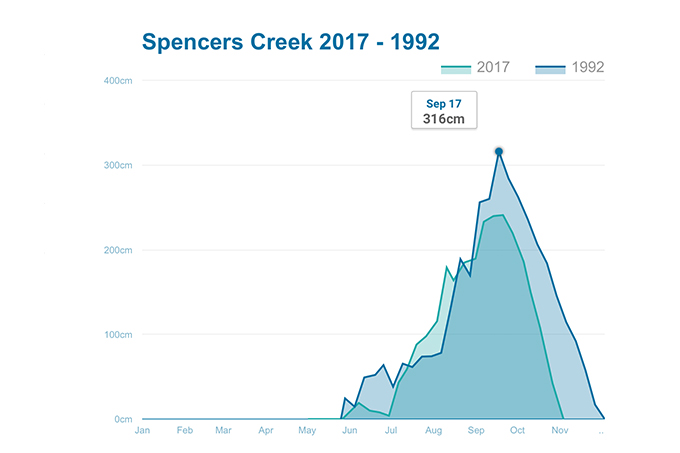 “I worked at Falls [Creek] in ’92. Last of the 3 metre seasons. No epic dumps, but just kept snowing from late June to early September.” – Mark Williams (A Facebook comment on our top snowfalls post)

Interestingly the discussion over what caused this cooler late season revolves around the eruption of the huge Mt Pinatubo volcano in the Philippines the year before (2ndlargest volcanic eruption this century).

The eruption injected roughly 17 million tonnes of microscopic sulphate aerosols into the stratosphere, where they remained for a few years reflecting incoming sunlight, which had the profound effect of cooling the planet some 0.6 degrees Celsius. The more you know hey.

Just two years after the snowy Hydro began recording snow depths up at Spencers, they measured their 3rddeepest figure to date.

Obviously this begs the question – how deep could was it out there in the early 20thcentury?

Is it weird to be attracted to a line graph? Image:: Snowy Hydro 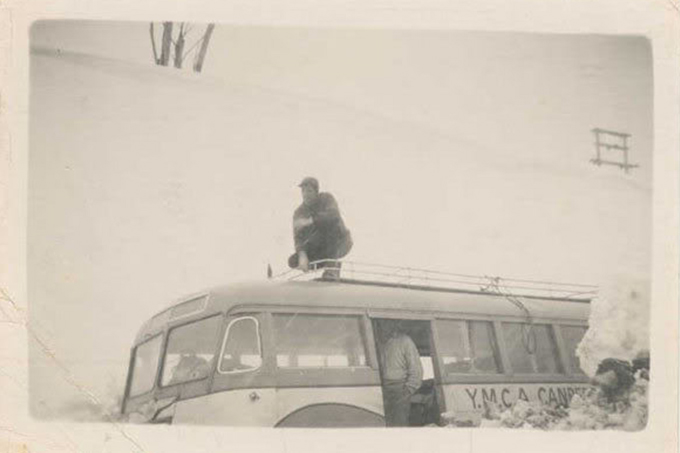 Getting to the pointy end of the list now folks! (Line graph pun intended).

The depth at Spencers Creek on opening weekend in 1964 was just 55cm (granted, a considerable amount these days). Three weeks later on July 6th, the depth had nearly tripled to 155cm. Three weeks after that on the 27thof July, the depth cracked the 3-metre mark.

By late August, Charlotte Pass were themselves measuring snow depths of 480cm with snow sticking around until late November. 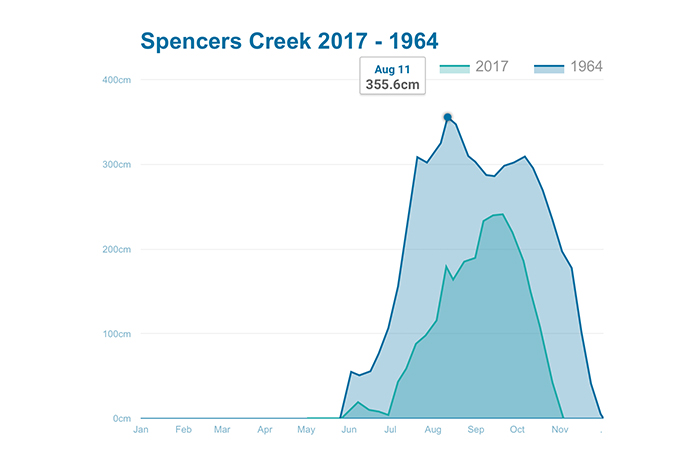 So good in fact, was 1964, that it even featured in overseas ski magazines. Although we couldn’t find the image the author was referring to here, he sure paints a pretty picture.

“With this issue, SKI concludes its 1964-65 winter publishing season, but we hope that our readers will not bring their ski activities to an abrupt end… in a world made smaller by jet aircraft, skiing never ends. To prove the point, Mt. Tom, Massachusetts, instructor Jules Eberhard travelled last summer (northern hemisphere summer, that is) to Australia, whence he sent this picture showing that the chairlift maintenance crew at The Chalet in New South Wales was having an unusually easy time of adjusting sheaves on the towers. The reason: snow, piled up in depths of 38 feet, buried chairs and reached almost to the top of the towers. By the end of July, so much snow had fallen in the winter land of kangaroos and koala bear that hotels had disappeared up to the third floor.” – Spring 1965 issue of SKI, a US Magazine. 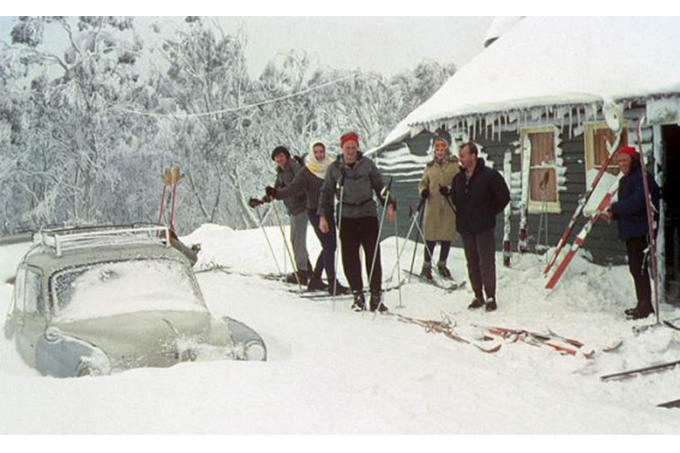 “My dad used to talk about the 1964 dump and how they skied off the roof of the chalet at Charlotte Pass.” – Georgina Swan (A Facebook comment on our biggest snowfalls post)

“Whole lodges were buried as was the Village T-bar. The Summit T-bar was also near buried but skiers earned a day ticket for digging out the towers.” – Lee Saunders (A Facebook comment on our biggest snowfalls post) 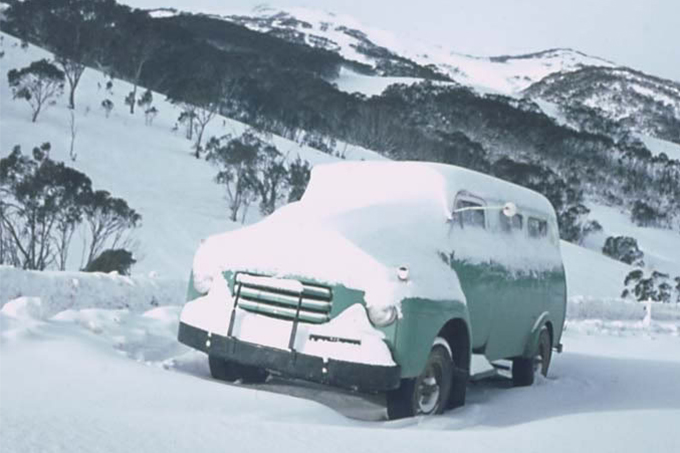 Interestingly, 1964 also happens to be another year in which a large volcanic eruption occurred – Mt Agung in Indonesia – which was said to have cooled the climate the same way previously mentioned, some 0.3 Degrees Celsius.

1981 is the jewel in the crown of best Australian ski seasons. 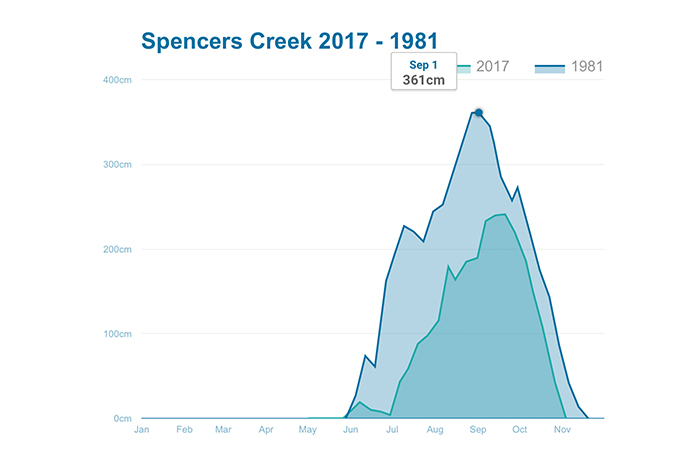 It’s fitting that the 1981 line graph appears an almost symmetrical, towering peak. It look’s like it’d offer some nice fall line skiing and puts the ‘good’ year of 2017 to shame. Image:: Snowy Hydro

Snow depth at Spencer’s Creek peaked at a staggering 361cm – and in September no less – with snow sticking around the main range well and truly into the summer months.

Some 1981 Anecdotes from our readers:

“My first season of skiing was 1981. One of my fond childhood memories was in seeing the snow for the first time ….. Waist deep all the way to Cooma. When we got to the Smiggins carpark there were cars completely buried. A really great intro to skiing and it produced a lifelong love of skiing and the Snowies.” – Jason Upcroft

“1981 was extraordinary! We were late one Saturday morning coming into Thredbo and the road was completely blocked. We waited for hours but nothing so we threw our skis on and skied the roadside! Insane stuff! What a year!” – David Miles

“Best ever was 1981… would love to see that again… could not ski under the chairs in places as those on the lift were almost on the ground…. the road from Wilson’s Valley was bus height on both sides with snow…” – Adele Scott

“1981 if you were alive you’d agree this was all time!” – Charles Jeffries

Before you write off the above anecdotes as hyperbole – don’t worry, I wouldn’t have blamed you – Mountainwatch reader Mike Saunders gave us some visual proof. 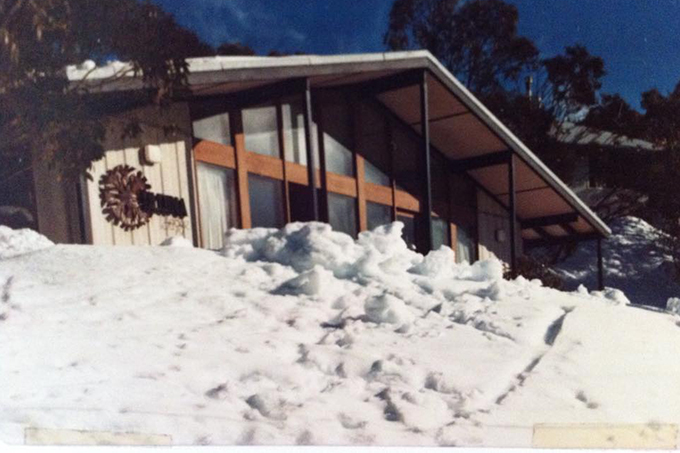 “1981 at Falls [Creek] when I was just a kid, we could walk off the balcony [there was] so much snow… This photo is from ‘81 of Oldina ski club at Falls [Creek].” Caption/Image:: Mike Saunders 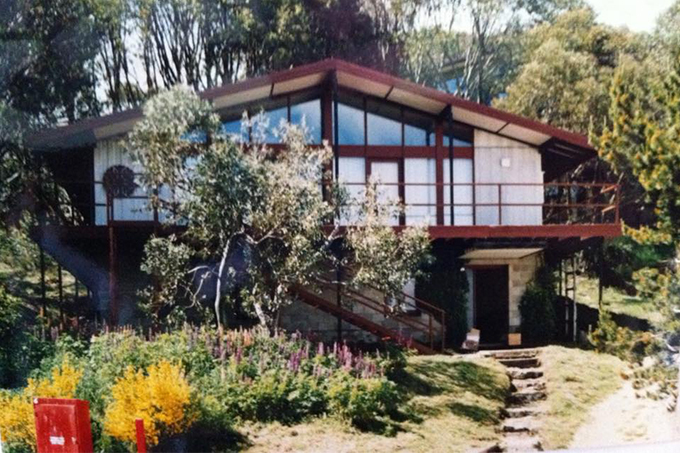 “Here’s a summer shot for a perspective of how deep the snow was (in the above image)!” Caption/Image:: Mike Saunders

Whether you were present for any of these seasons is far less likely than if you were present during one of the biggest snowfalls we previously discussed. You may have noticed that the most recent ‘Best Season’ discussed was during 1992… 26 years ago. As mentioned, that year was the last of the ‘three metre seasons’, which for whatever reason – though one overwhelming reason stands out – have pretty well come and gone. For some context, they used to be relatively common; there were three in the first twenty years since records began in 1954…

No doubt the topic for another article, whether we see a 3-metre base at Spencers this year, very much remains to be seen, I’d go so far as to say I’ll eat my hat if we do (and gladly). Until then have a look at the Grasshopper’s June update and check in every Monday, Wednesday and Friday when he updates his detailed resort forecasts here.